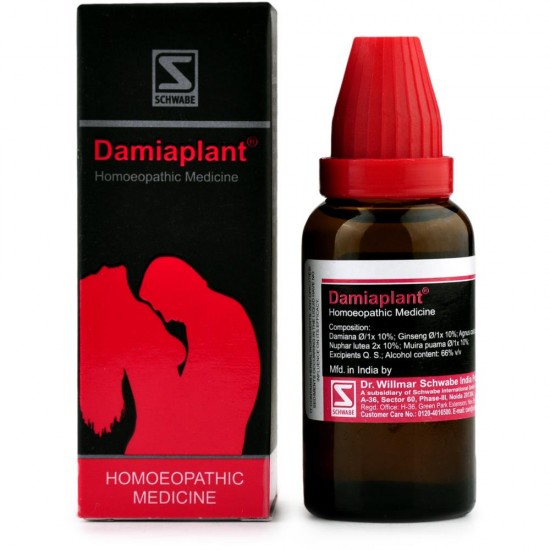 It is used to treat sexual dysfunction in men by acting as an aphrodisiac. It's also employed as a general tonic to improve overall wellness. It acts as an antidepressant that helps in mood upliftment. Along with that, it's known to promote immunity. It's also indicated for sexual health issues such as low libido and premature ejaculation in addition to impotence. It is also utilised to treat neurasthenia (sexual stimulation ), nervous exhaustion, and weakness.

What are the Key ingredients?

The dosage of this tablet will depend on your condition. It would be best to consult your doctor and take the dose as recommended. Usually, it is suggested to take 10 drops 3 to 4 times a day with some water. However, it's always advised to follow the physician's instructions regarding the dose of the medicine because taking over the recommended dose may cause side effects.

Yes, it's largely safe when taken under the supervision of a doctor. Do speak to your doctor if you are taking any medications for other health problems or even if you are on other nutritional supplements to avoid any undesirable side effects.

It's an Ayurvedic formulation that contains various herbs like damiana, ginseng, agnus castus, nuphar Lutea, and Muira puama as active ingredients. These herbs are known to improve libido and overall function of the penis. The medicine is aphrodisiac in nature which helps enhance sperm count and enhance libido. It's also regarded as beneficial in the treatment of erectile dysfunction (impotence) due to its role in strengthening the penile tissue and boosting the blood flow to the organ.

Does it increasing sexual stamina?

Damiaplant contains damiana that's an effective supplement to boost libido. The plant shows an ability to potentially enhance sexual desire and intensify orgasms in men and women. Damiana may enhance an individual's sexual life in numerous ways. To begin, there is evidence suggesting its capacity to enhance female orgasms, particularly when used along with supplementary herbs. This is an area of enormous interest for girls who seldom orgasm or have yet to whatsoever. Damiana shows contributions to the region of weight loss, since it promotes feelings of fullness after meals. This could help individuals keep off extra fat, resulting in increased sexual confidence and so, desire. Moreover, It has been discovered that extra weight can result in erectile dysfunction, which damiana also helps to stop.

It is an Ayurvedic formula which contains different herbs like damiana, ginseng, agnus castus, nuphar Lutea, and Muira puama as active ingredients.
These herbs are known to boost endurance and general role of the penis. The medicine being aphrodisiac in character helps improve sperm count and boost sex drive. It's also regarded as beneficial in the treatment of erectile dysfunction (impotence) owing to its role in strengthening the penile tissues and boosting blood circulation into the organ. The herbs present in this medicine assist in improving blood circulation and fighting free radicals. This in total helps boost immunity, fight weakness, and enhance mood.
It is used as a treatment for erectile dysfunction in males by acting as an aphrodisiac. It's also employed as a general tonic to boost general health. It's proven to promote immunity and act as an antidepressant. It's also indicated for sexual health problems such as low sex drive and premature ejaculation in addition to impotence. It's also utilised to treat neurasthenia (sexual weakness), nervous exhaustion, and fatigue.